I went into this race feeling pretty good all round as my fitness was high and while I had come down with a cold the week of, I took some time off my legs, tapered properly, and felt like I could put in yet another solid effort. My back has been doing excellent as I have finally figured out the balance I need to keep everything healthy: keep my upper back mobile, keep my hips and glutes loose with massage and stretching, and getting in some solid core work and overall body workouts at CrossFit Vancouver Island (which I highly recommend!). 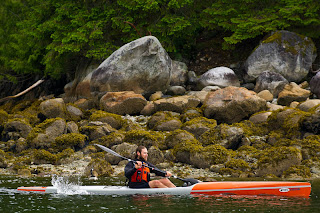 For the first time at a MOMAR, I paddled a Think EVO surfski courtesy of Bryan Tasaka through the Big Chop paddle series.  I made it out on the water twice prior to the race and found it to be the first surfski that I felt stable and comfortable enough in to try and paddle in a race.  I also used a wing blade paddle which, while not as capable for bracing and changing strokes as a flat blade, is definitely a faster paddle to use.  I knew Bart Jarmula would be my main competition in this race and being that he put 15 minutes into me last year, my goal was to limit his lead but primarily, not to flip!  I got in my boat and while not perfectly adjusted, it seemed to work fine and I felt somewhat comfortable while paddling it to the race start lineup.  Before I knew it, the gun went off and the race had begun. 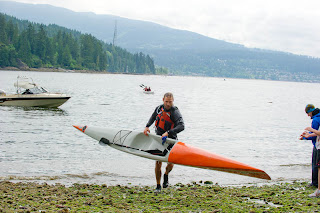 The paddle went quite well as I maintained a steady pace and avoided any chance of flipping by turning the boat into broadside wakes created by passing motorboats.  I stayed in third place and watched Bart slowly pull away adding a bit of time into me on each stroke.  As we were paddling identical boats, it was obvious that the time and skill that he spent in the kayak was paying off.  Coming into the first transition area of the race, he had put a solid five minutes into me.  Time to catch up!

This race was probably the first I have ever done where I actually took it a bit easier through the first half of the course.  I was still going at a good clip but just tried to ease it down especially on the first climb that brought us from sea level to the top of SFU while climbing over 500 stairs.  With this type of climb, going anaerobic would be easy so I really focused on easing down the effort and being efficient.  I made a small nav error which cost me a bit of time but coming into the bike TA, could see Bart departing not too far ahead so knew that I was doing well.  Onto the bike and down some technical singletrack, the Burnaby course had lots of gnarly terrain that I thoroughly enjoyed!  I've been riding a fully rigid steel 29er for the past six months and while I know that I could ride some of the techy down sections faster with some suspension, I have come to love the climbing and all-round predictability of a rigid (geometry never changes, no pack down in the front end or loss of power while standing).

Then things started to fall apart.  For the first time ever in a race, I decided to try and get splits from some of the manned checkpoint staff.
"Five minutes!"
I was sure I was gaining on Bart yet at the next checkpoint, I was told I was even further behind.
"Eight minutes!"
I was flabbergasted.  I guess I just don't have it today.  Maybe the cold is worse than I thought.  Maybe this is it, I'm good for second today and that's what it'll be.
I never get this type of jargon going through my head, yet here I was, mentally creating a toll on my body to slow down and accept defeat.
It wasn't until I rolled into a checkpoint where my good friend and course designer Gary Robbins himself was positioned, that I got slapped out of my defeatist slump.
"Bart is less than two minutes up on you.  Looking good.  Go get him!"
It was just the motivation that I needed. 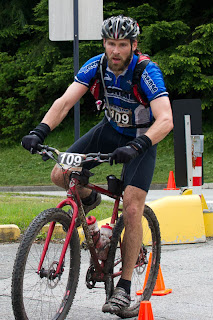 I upped the pace, cleaned the Cardiac hill climb, and rolled into the orienteering stage transition area just as Bart was heading out.  I did a quick transition and was off on a similar loop to collect the controls.  For the next half of the O course, Bart and I raced side by side, exchanging places a couple of times with me making a mistake, than me taking a better route choice. 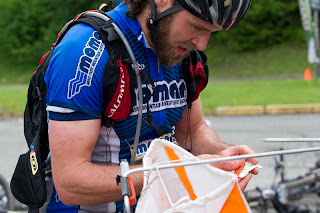 I got a bit of a lead, came into the TA first, and jumped onto my steel steed for the last bike section.

I felt quite good at this point and put in a big effort to gain as much time as possible.  I rode the trails clean with a good amount of pep which is rare for me so late in the race.  I came into the final O stage strong, picked off the controls in a good order, and just a couple before the finish line, came into an old building foundation where a control was hung in just off the dirt floor.  The wall was a few feet high so I lowered myself a bit and then jumped down into pain.  At first I thought I just hit my quad on a stick and it wasn't until after doing a double take that I saw a hole, rather than a cut, in my leg. It was half an inch deep filled with black blood and looking over, I saw I landed onto a flat rusted piece of foundation metal.  I knew then and there that I would be taking a trip to the hospital. When was the last time I had a tetanis shot?

While my leg hurt a bit, the adrenaline kicked in and allowed me to push hard through the last couple of controls.  I knew at this point that I had first and crossed the finish line all smiles and super happy with how things turned out. I came out of my mental stupor, came back strong, and finished with a solid lead over the rest of the pack to take my 10th overall MOMAR title! Bart Jarmula came in 2nd place and a battle between Norman Thibault and Hayden Earle saw Hayden cleaning up the O course faster and taking 3rd, his been finish to date. 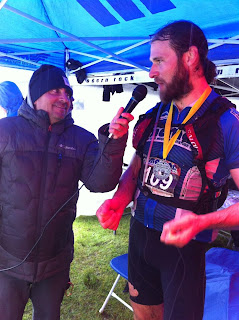 Overall, I had a great time although was a bit disappointed in the lower than average turnout being that the course was really top notch, and everything from the food, to awards, to venue and after-party was excellent.  Bryan Tasaka really knows how to put on a great event! Hope to see you all in Cumberland in the September!

Great work Todd. Love the story so much!