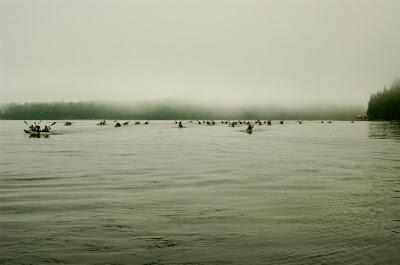 Back injuries suck. I know. I have had one now for the past 10 months and have had some good experience now dealing with it. While I have had many ups and downs, I think I finally have things figured out. A bit of extra rest, back mobility exercises, core strengthening, and a dash of acute listening for any signs that I might be doing a bit too much was just what I needed.

Being sidelined for Raid the North Extreme was tough, but on the other hand, it put things into perspective for me and also allowed me time to heal and work out a recovery plan. Limiting my time on bike was probably the best thing for my body as the flexed over position of the back kept adding extra strain that my back didn't want to deal with. On the other hand, running has been going well since I tend to do well with my back in a neutral position. Gradually, I was able to add some distance until my form came back to a decent shape and I felt confident going into MOMAR Cumberland that I should be able to put in a decent performance.

The Cumberland MOMAR in 2005 was my first ever adventure race and even after 13 additional MOMARs, I still always look forward to making it back. Every year seems to be the same for the weather as well; despite rain and storm warnings, the day of always seems to manage to hold off and provide a decent window of weather. This year was no exception.

The kayak stage this year was shrouded in fog which added a nice touch of mystery as you couldn't quite see where you were going to go next. I managed to borrow a friends Seaward Quest which is a pretty fast ocean kayak with a relatively narrow beam and with a long 19 foot waterline. I briefly tried out a surf-ski the week before the race and quickly decided against using it due to my inexperience in getting back in after a capsize and not being used to the position which could compromise my back (and race). Thus, I choose the Quest and this boat helped me keep a good draft with the doubles and kept me close to the front of the pack. I had a pretty good paddle and felt fairly fresh to get on the legs once we hit the beach and transition area.

In a twist this year, Bryan Tasaka put in a big trekking section right after the paddle; when I say big, it was a maybe 13km but for some racers, this section turned into a half marathon. After three checkpoints, I was racing at the front of the pack with Norm and Stephan from Frontrunners, Shane And Garth of Team PIT, and Marhsall House and Ryan Pogue who destroyed the paddle section in a double surf-ski. Maybe it was group mentality or the symbology of the map but all of us missed a small track we were supposed to take as we were all looking for what was shown on the map as a road. Whether the track should have been shown as a trail or road was not really what caused all of us and several other racers to have problems though; there turned out to be a short logging spur road just down from the track and this spur road wasn't marked. Thus, we started to aimlessly bushwhack from the end of the spur road assuming that there must be a trail just around the next tree. I knew early on that this couldn't be correct so I decided to climb the hill to the north and see if I could catch onto another existing trail (if we were in fact in the right location, than there should be a trail at the top of the climb). At this point, Marshall tried to get Ryan to follow but in a few moments, I was out of sight. The top of the climb had nothing but an old overgrown logging road heading down. I knew then that we must have veered to far south and that a quick additional bushwhack to the north would get me in the right place. After some cursing and a swamp crossing, I was on the correct track and had racers everywhere. A few more curses and I was off to climb up to control 4. I had lost over 20 minutes and now had some serious catching up to do.

The rest of the trek went like clockwork as I passed several other teams and ended up running into the bike transition tied with Jeremy Grasby for 2nd overall and with Roger and Hayden just ahead of us in the top spot. My transition was clean, I wished Jeremy luck, and started on the big bike climb to catch the leaders. At this point, I was feeling quite good although my legs were a bit on the sore side due to the extended trekking section I did. I caught Roger and Hayden and continued at a good clip to the top of the climb with only a short hike a bike in the steepest part. 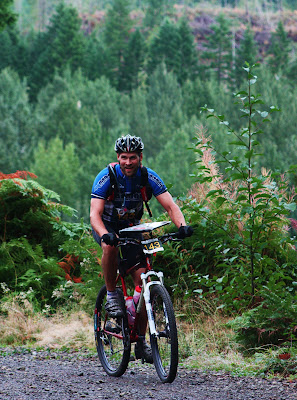 Just before hitting up CP12, I tore open my sidewall on my rear tire. Shitty. While I do run tubeless and the stans sealant might have held, the tear was a bit on the long side and I would need to add additional air anyway. I tried to run the tire as is but shortly after dropping onto the Bear Buns trail, I knew that I was losing air and had to stop. A quick tube install and CO2 did the trick but unfortunately, my CO2, being designed for 26" wheels, was not enough to give me enough pressure so I had to use my stupid pump anyway. Jeremy had already passed me and just as I finished getting the tire up to pressure, I heard Roger and Hayden coming down the trail so took off before I was in sight.

My riding was a bit labored after stopping for 5+ minutes but I quickly regained myself and I started to have a fantastic ride. It was now Grasby and I and hard as it would be, I would try to track him down (Grasby is a phenomenal single speed rider who builds and knows his local trails inside and out so catching him would be a big effort). After a few checkpoints, I rolled in and tried to get a time on Grasby.

While I was ok with taking first, I couldn't figure out what could have happened other than that he took a wrong turn (which turned out to be the case). I hammered down the last part of the course and rolled into the final TA to complete the final orienteering stage of the race. This section started out very sloppy with getting totally confused with the scale of the map and thinking I was on a trail that I actually wasn't. I wasted a bit of time and soon heard that both Grasby and Roger & Hayden were also out in the 'O' course. I really tried to focus, had a clean back part of the stage and went to punch the last control... where is it! Turns out, some kids at the campground took down the final control so with Carl Coger hurrying over to replace it, I ran into the finish shoot and ecstatically took my 9th overall MOMAR win. 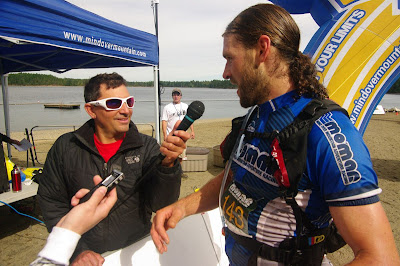 While I wasn't super happy with how I raced with making a nav mistake early on and losing concentration going into the orienteering stage, I was overjoyed that I came through after such a hard effort and had absolutely no back issues whatsoever. It really seems like I have a good plan that is working for me and that it is letting me compete to the level where I would like to be.

Another big shout out to all the awesome volunteers who helped make this event run like clockwork and for Bryan Tasaka who put on yet another premier event.

Nice pics, you really had the great race. Congrats for a great job well done.